Hospital rooms with types of machinery that directly supports life must be built with IT grounding system – isolated from the local transformer’s ground. That construction has a number of advantages. First fault only generates an alarm, but the system remains functional and safe. The fault current is very low and leakage on the equipment rises very slightly. To conform the standard IEC 61557-8, voltage between accessible surfaces cannot exceed 50 V.

Normally, these are surgery rooms and intensive care units. Since the rest of the building is TN or TT for cost and ease of maintenance, the IT rooms are isolated from the rest of the installation using isolating transformers.

Isolation monitoring device (IMD) - A monitoring device is installed between phase and PE lines. As the insulation degrades, the circuit from phase to PE closes and a current starts flowing to ground. The IMD senses a voltage drop on the measuring resistance and alarms once it is large enough. Exact measuring principle depends on the measured system and can be proprietary. IMDs mostly include some form of interference suppression. Its own leakage or use of high voltages in the vicinity might otherwise influence the results. It must be able to measure both symmetrical and asymmetrical insulation faults, as required by the standard IEC 61557-8.

Symmetrical fault is one where insulation on all connected conductors fails in the same way. Asymmetrical is degradation of a single wire, or connecting a faulty device.
IMDs are designed to be an early warning and a call for maintenance. It can have a built-in self-test, or it can be tested by changing the resistance between phases with an instrument. Limit for bad insulation in hospitals is most commonly 55 kOhm.

RCD protection - RCDs should not be activated at the first fault in an IT system. The leakage at first fault is barely measurable, so there is no reason for RCD to trip. It can happen due to combining higher leakage currents from large appliances. That should be taken into the account when designing and maintaining protection. At first fault, an IT system should essentially start working as a TN/TT system, and as such needs to be protected with RCDs. Second fault current can be exceedingly high, creating both a fire hazard and severe danger to life.

Fault finding system - Locating the fault in an IT system is its main limitation. There is only one IMD (as opposed to multiple RCDs in other earthing systems), which can make looking for a fault a large-scale operation. Fault locators are devices that help with that. They are systems of current transformers at different points in the installation. To find a fault, a brief simulation of a ground fault is induced with electronically controlled current magnitude. A circuit is formed from live conductors via insulation fault through PE wire and back to the tester. The CTs measure the current in any relevant point in the network. Fault can be located by comparing the measured values to expected ones, or by observing the current dividing between the branches. The system has to be built in along with the IMD, and is usually very expensive.

MI 3110 is a specialized testing instrument for IT systems. It functions include testing supply properties, like voltage, frequency and phase sequence, and safety, like line impedance, prospective short circuit current, voltage drop and testing insulation monitoring devices. It has a single AUTOSEQUENCE® with adjustable limits and parameters that thoroughly tests the isolated area through sockets. It is also possible to perform each test separately. It is easy to carry and designed for use while strapped to the body, making it a perfect tool for field work in buildings or mobile units.
MI 3155 supports testing IT systems as one of its many functions. It features the same AutoSequence® as MI 3110, and can run each test separately. Both testers perform the measurements automatically after being connected to the socket or other measuring points. 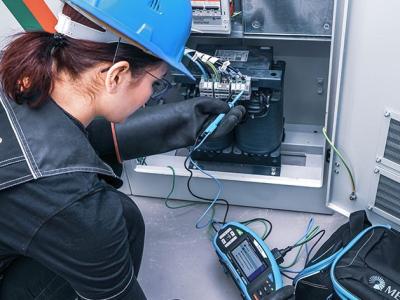 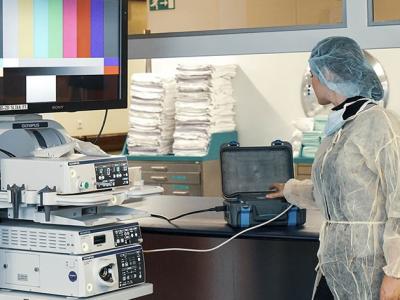